I’m lucky to have great clients find me for copy editing or proofreading. I wanted to briefly mention a couple of books that I really enjoyed working on recently.

East Coast writer Lucy J. Madison is a new author to me, but she has published several lesbian romances, including Personal Foul, a sports romance. I was lucky enough to edit her latest, A Recipe for Love, which is currently on pre-order. Set in upstate New York, this book tells the tale of Danika Russo, a woman in middle-age who has worked for thirty years as a mail carrier and just retired, having taken care of her partner while she died of cancer and her father as well. Now she has inherited an ugly house, filled with reminders of her unhappy childhood.

Books which show characters gradually becoming unstuck are particularly appealing to me. This slow, simmering burn of a book shows Danika taking steps outside of her comfort zone, including daring to start a relationship with a younger woman, Finn, who seems attracted but strangely elusive. The Italian cooking class Danika attends, which could have been a cliché, brought a great zest to the book. And there are recipes at the end! I love an unconventional romance, so this book is recommended.

Frank Tayell is an author whom I wouldn’t personally have discovered if it were not for my work with him. He has a long-running series of post-apocalyptic novels called Surviving the Evacuation. (He reached out to me halfway through this series.) Since Tayell is UK-based, the novels are sometimes a challenge to proofread because part of my job is to preserve the British-English spelling (while flagging anything that seems too untranslatable). 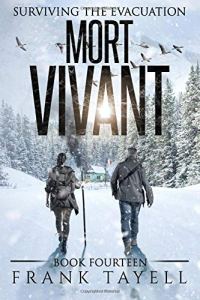 Working on a book at my level of focus means entering another author’s mind and world, to a certain extent. I rather like Tayell’s world, where the cerebral characters are pushing to survive, looking forward to the tenuous future, and striving to preserve social order and human decency as best they can while they move restlessly around the English (and now French) countryside in search of a stable refuge. And yes, there’s plenty of zombie-killing, but I doubt anyone really reads these books solely for this particular feature. It doesn’t surprise me that Tayell has loyal fans who have followed the series through all fourteen books!

Love, sex, and violence appeal to readers, but a really well-written book can transcend genre. My job is to help each independent author achieve their vision, making sure that jarring inconsistencies are smoothed away. It can be as easy as changing mandolin, a musical instrument, to mandoline, a grater (in a cooking context) or filling in missing words, usually pronouns, that the author has dropped in his or her haste. The trick is to stay attentive to the language and never approach the editing of the book in a purely mechanical way.

Let me know if I can help with your editing or proofreading needs in the next few months!